Several Routes and Interstates traverse the area of Las Vegas, Nevada, and in this article, we shall talk about them and why you should prioritize the usage of certain roads over other roads.

First off, we shall talk about Interstates, as these are the roads that most people use and usually cross major cities and important locations within said cities, the city of Las Vegas included.

The route that you should take on the way to the city is Interstate 15(if you want and abbreviation, use I-15), this highway, coming from the south, practically splits Las Vegas in half, and gives you access to much of the city’s interior, where all the businesses and tourist spots are located. It then exits the city in the northeast, alongside Nevada State Route 604, another route you can take if you wish to come to the City of Lights.

Another Interstate one could take is Interstate 215 (with a length of 51 mi (81 km)), whose south terminus is located near Henderson, at an interchange with Interstate 515/Route 95/Route 93. Many people call it the Las Vegas Beltway, though its official name is the Bruce Woodbury Beltway. It isn’t a full Interstate however, as the Interstate portion of the road only covers a little over 4.6 miles (7.4 km). The rest of it, called the Clark County Route 215 (CC 215), composing the remaining 39.2 miles (63.1 km) of this semi-circumferral highway. This is also a good road to take if you wish to access areas on the border of Las Vegas, as it almost surrounds the entirety of the city.

Looking for another Route? Not to worry, there’s also Route 95, which also cuts through much of the Silver City. Coming from the south, from the state of California, it temporarily becomes concurrent with Interstate-515, a spur route of Interstate 15. It intersects with I-15 before exiting the city’s administrative boundaries near Centennial Hills Park.

State roads that allow you to access Las Vegas? Oh, they exist all right, I’ll point out some good State Roads for you to take too.

First, there’s State Route 159 (SR 159 for abbreviation), this road begins as a fork of another State Route coming from the city, 160, and quickly curves back to Las Vegas, going through the settlement’s Arts District before merging with Interstate 515. A good way to access the central areas of the city if you ask me.

Nevada State Route 582 (or SR 582 for short) is another important road you can take to access much of the city. Present-day SR 582 officially begins at the interchange between I-515, US 93, and US 95 at Wagon Wheel Drive in Henderson, although the highway itself actually starts at the intersection of Boulder Highway and Wagon Wheel Drive just east of the interchange. The highway then goes past the center of Henderson, going through the eastern sections of Las Vegas before coursing throughout the middle sections Las Vegas, it then ends with the merging of it with Interstate 515. 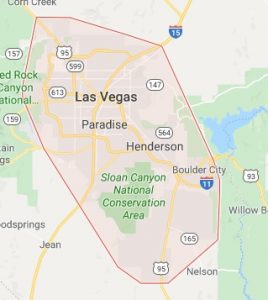